The Day My Father Became Bush

The Day My Father Became a Bush is a delightful and poignant story of wartime Europe.

Before he becomes a bush, Toda’s father is a pastry chef. He gets up at the crack of dawn to bake twenty different sorts of pastries and three kinds of cake. Until, one day, everything changes. Fighting  breaks out in the south and Toda’s father has to go there to defend his country.

Luckily he has a manual called ‘What every soldier needs to know’. This tells him how to hide from the enemy by using branches and leaves to disguise himself as a bush.

Toda remains in the city with her grandmother but even there it’s no longer safe. She is sent to stay with her mother who lives across the border. Toda’s journey is full of adventure and danger. But she doesn’t give up. She has to find her mother. 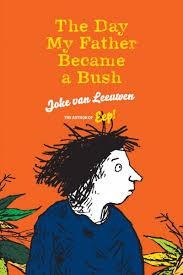 You're viewing: The Day My Father Became Bush £8.00
Read more