This quintessentially Indian version of a much loved children’s classic features art from the Patua scroll tradition of Bengal, India. Carlo Collodi’s original Italian text centres on a marionette who escapes his wooden fate and has many adventures, including a stint at sea in the stomach of a shark. This Indian version is abridged from Carol Della Chiesa’s well-known English translation, and illustrated by award-winning scroll painting Swarna Chitrakar.

The ‘on-going dialogue’ between Swarna Chitrakar and the Tara team is what finally makes this book an exciting experiment. Not only was the story adapted to suit the style of painting, but Tanuja Ramani, the designer has highlighted the strong lines of the painting by placing these on a white background. In this way the strong colours stand out more prominently giving a certain force and animation to the illustration. — The Book Review India At the onset, one may wonder how a traditional Indian painting style could suit an Italian fairy tale. But put your doubts aside as The Patua Pinocchio breaks all the stereotypes and emerges as a complete package… While the story was originally Italian and the illustrations westernised, The Patua Pinocchio only retells through the multifaceted storytelling cum painting medium of Patua. — All About Book Publishing The storyline remains similar to the old classic, but the visuals add a different dimension to the story. Bright colours, bold strokes, super expressions and lovely composition – The story of Pinocchio gets a new form and shape. – Indian Moms Connect An engaging telling in just about 180 pages, the story pops out and grabs the reader via starkly stylized original illustrations. — Saffron Tree The differing elements come together really well to produce a coherent and highly enjoyable version which stands out from the norm. A lovely gift book and one to cherish, beautifully produced in hardback with high quality paper which shows the illustrations to full advantage. — Parents In Touch U.K.

Carlo Collodi Born Carlo Lorenzini, this 19th century Italian children’s author was best-known by his pen name Carlo Collodi, under which he wrote the world-famous title ‘The Adventures of Pinocchio’. It was originally published on a weekly basis in the children’s newspaper Il Giornale per i Bambini and Carlo passed away before Pinocchio became well-known outside of Italy. Swarna Chitrakar Trained in the traditional Patua form of folk art by her father and uncle, Swarna hails from West Bengal in India. Despite marrying into a family that disapproved of women painting, Swarna – with support from her husband – went on to become an extremely successful artist. Patua is a folk form that combines performance, storytelling, and art. Traditionally artists were itinerant, travelling from village to village to sign from painted scrolls that they would unroll as they performed. 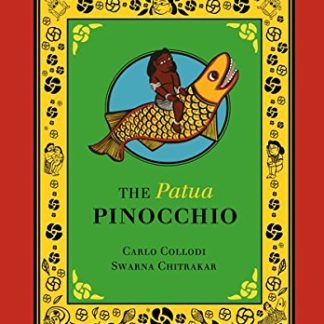 You're viewing: The Patua Pinocchio by Carlo Collodi, Swarna Chitrakar £11.99
Add to basket