Exotica Suite simultaneously exists an a vinyl LP and audio CD made in collaboration with the musician Paul Isherwood, best known for his work with The Soundcarriers.

Exotica Suite begins with an Easter Island creation chant in the style of William Blake’s Proverbs of Hell and an imaginary Polynesian colony in England in the 1780s then takes in a series of tall tales featuring Hawaiian musicians. Other Fictions fabricates occult histories in Nottingham caves and embarks on a labyrinthine sea voyage with the body of a late Hawaiian King. Now gathered in one place for the first time, the various forgeries, stories, false lectures, misleading anecdotes and other writings in Exotica Suite & Other Fictions are the flip-side to Black Glass: New & Selected Poems, also published by Shoestring.

Exotica Suite simultaneously exists as an audio CD, included with the book..The recordings featured on the Exotica Suite CD remix and re-edit some of the texts from the book, then perform these to music created by Paul Isherwood, best known for four acclaimed albums made with The Soundcarriers, most recently Entropicalia (Ghost Box, 2014). The recordings hopefully go beyond the usual idea of putting readings to background music and work instead to create free-standing tracks from the source materials – taking inspiration from Eden Ahbez, Yma Sumac, Link Wray, Sun Ra and an imaginary British-Polynesian folk tradition, among other things. Featuring contributions from Adam Cann, Dorian Conway, Rebecca Lee, Arianne Churchman, Parisa Eliyon, Alex Crispin & Greg Walsh.

“…spins a web that oscillates between the fictional and non fictional and encourages us to reflect on how we navigate the past and how this could affect all our futures.” 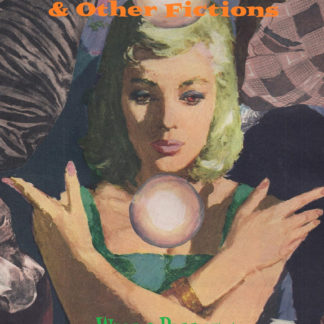